Breast cancer is the most common cancer diagnosed among Canadian women. Thanks to advances in mammography-based screening and treatment, breast cancer patients have some of the best survival outcomes of all people with cancer. Today, 88% of women diagnosed with breast cancer will be alive at least five years after their diagnosis.

That diagnosis often starts with a mammogram that is identified as abnormal, indicating the need for follow-up testing. In breast cancer screening, the abnormal call rate (ACR) is the percentage of mammograms that are identified as abnormal — and it is an important indicator of screening program quality. If the ACR is too low, there is a risk that some cancers won’t be detected. If it’s too high, which is currently the case in Canada, people who don’t have cancer will be asked to take unnecessary tests.

Is Canada meeting its ACR targets?

No. Too many people are receiving follow-up testing. For more than a decade, ACRs in Canada have been higher than national targets: 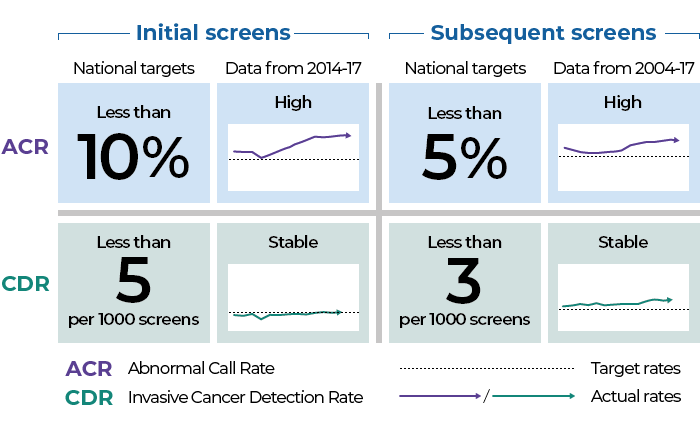 ACRs vary across the provinces and territories, but most breast cancer screening programs are above the national ACR targets. Between 2008 and 2012, ACRs for subsequent screens increased from 6.1% to 7.4%. By 2017, they reached 7.8%. Similar increases have also been seen in ACRs for initial screens.

While ACRs are up, the cancer detection rate (CDR) has stayed stable. There has also been a decrease in positive predictive values (PPVs), which measure the likelihood that a patient recalled for further testing will actually have cancer.

Canada’s high ACR, steady CDR and low PPV mean breast screening programs are sending more people to follow-up testing without finding additional cancers. These tests are very stressful and can harm a person’s physical and psychological wellbeing. They also have an impact on the health system, diverting resources from others who truly need testing.

ACRs for both initial screens and subsequent screens have been high since 2013. 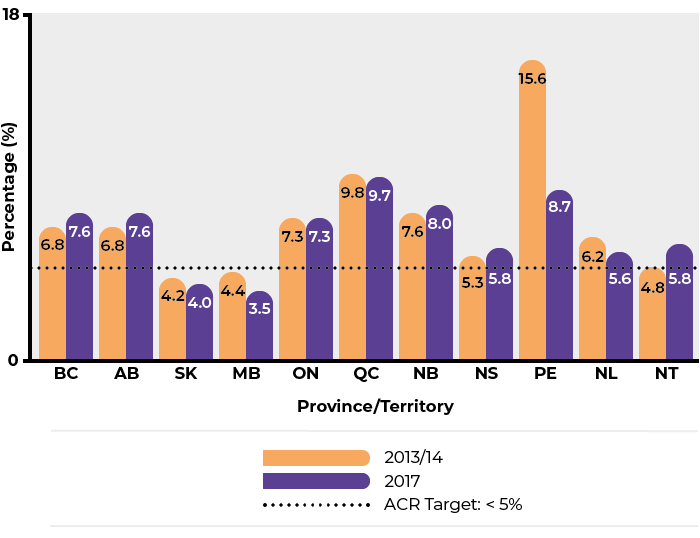 What happens if ACRs are reduced?

If the ACR for subsequent screens can be dropped to 6% by 2029, Canada could avoid:

In total, $110 million in unnecessary follow-up tests could be spent on other areas of need.

ACRs around the world

Breast cancer ACRs in Canada are higher than those of Australia and most European screening programs. Canada’s CDR is comparable to Europe and lower than Australia.

International comparison of ACRs in breast cancer screening by initial and subsequent screen:

International comparison of CDRs per 1,000 screens in breast cancer screening by initial and subsequent screen:

Target guidelines for acceptable ACRs also vary internationally. However, the Canadian ACR target is within range of other countries’ established targets with comparable health systems and screening programs.