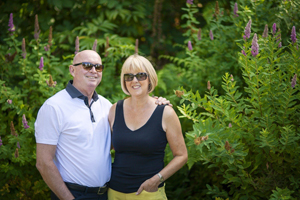 President and CEO of Radon Environmental, Alan Whitehead talks about why he thinks radon caused his wife’s, Janet’s, lung cancer.

In 2010, your wife was diagnosed with lung cancer. But she’d never been a smoker. How did you figure out the cancer was radon related?

When my wife Janet was diagnosed four years ago, I was heavily involved in developing the first radon map of Canada. I knew that the area that we had lived in for six years in Ottawa had very high levels of radon.  And Janet had never smoked or really been around people that smoked.

I contacted the current homeowner and shared Janet’s story. We sent her an electronic radon detector so that she’d know, for her own peace of mind, and so that Janet and I could be sure. After about a week, she called me and asked me if the detector could be malfunctioning. She said it had a reading of 3200 becquerels. You really should remediate if your reading is higher than 200. So 3200 is really not good. We sent someone over to confirm the reading—which wasn’t just in the basement either, but all through the house—and they remediated right away. This got the levels well below 100 becquerels. It’s really an easy problem to fix, you just must realize that it needs to be done.

I’m convinced radon is what caused my wife’s lung cancer. When we lived at that house, she was a stay-at-home mom, and she was in that house most of the time.

Did your wife show any symptoms of radon exposure before being diagnosed with lung cancer? Is there any way to tell if you’re being exposed to radon, other than testing? Headaches? Fatigue?

The two main symptoms are shortage of breath and dry cough. But lung cancer is normally the last thing a doctor will think of if someone presents with those symptoms, unless that person is a smoker. They’ll think blocked arteries or heart disease instead.

But we were fortunate to have a GP who was very persistent. After having the usual tests, x-rays and monitoring, and seeing that the symptoms were getting worse, he sent us for a CT scan to rule out lung cancer. Sure enough, they found tumours in both lungs.

What things do people most need to know about radon?

The importance of having homes and workplaces tested for radon

Review results about Canadian clinical smoking cessation approaches, now with data from 2018 to 2020